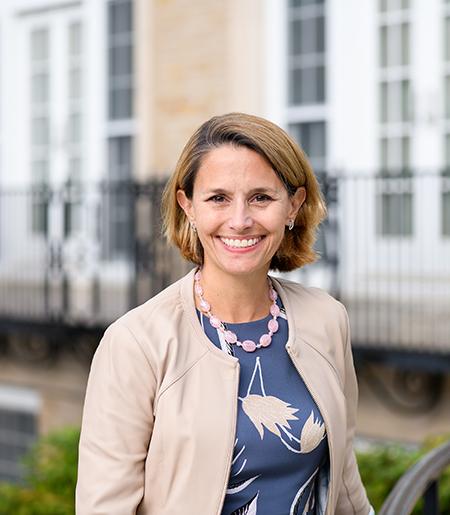 Rachel Dunifon is the Rebecca Q. and James C. Morgan Dean of the College of Human Ecology and Professor in the Departments of Policy Analysis and Management and Psychology. She received a B.A. in Psychology from Davidson College and a Ph.D. in Human Development and Social Policy from Northwestern University. Prior to joining Cornell as a faculty member in 2001 she was the recipient of an NIH-funded postdoctoral fellowship at the University of Michigan.

Professional Activities
Dunifon is an active member of the Association for Public Policy Analysis and Management, the Population Association of America, the Bronfenbrenner Center for Translational Research and the Cornell Population Center.

Dunifon’s research focuses on child and family policy, examining the ways in which policies, programs and family settings influence the development of less-advantaged children. Her recent book, You’ve Always Been There for Me: Understanding the Lives of Grandchildren Raised by Grandparents (2018) draws upon unique multi-method data to understand dynamics in households in which grandparents are raising their grandchildren.

Dunifon is co-director of Project 2GEN, which combines research, policy, and practice to address the needs of vulnerable children and their parents together.  Dunifon and her colleagues were awarded the inaugural William T. Grant Foundation Institutional Challenge Grant for their project titled "Protecting Vulnerable Children and Families in the Crosshairs of the Opioid Epidemic: A Research-Practice Partnership".

As PI Dunifon has won numerous externally funded research grants, including from the National Institutes of Health, the USDA, and the William T. Grant Foundation. Her work has been published in top journals in developmental psychology (Child Development, Developmental Psychology), public policy (Journal of Policy Analysis and Management), and family demography (Demography, Journal of Marriage and Family).

Dunifon studies child and family policy, with a focus on factors influencing the development of less-advantaged children.  Specific research topics include the relationship between maternal employment conditions and children's health and development; the well-being of children in various family living arrangements, such as single-parenthood and cohabitation; and the role of grandparents in the lives of youth.  Her forthcoming book, You've Always Been there for Me (Rutgers University Press) examines the lives of grandchildren who are raised by their grandparents.

Her work has been supported by a wide range of sources.  Rachel was awarded the William T. Grant Foundation's inaugural Institutional Challenge Grant Award.  She was also awarded an R01 grant from the Eunice Kennedy Schriver National Institute of Child Health and Human Development to study the influence on children of maternal employment patterns.

Dunifon's research has been published in Demography, Child Development, Developmental Psychology, and Journal of Marriage and Family.

Selected as the 2020 winner of the IPUMS Research Award

Dunifon, Rachel (2018).  “You’ve Always Been there for Me”: Understanding the Lives of Children Raised by Grandparents.  Rutgers University Press.

Amorim, Mariana, Rachel Dunifon and Natasha Pilkauskas (2017). The Magnitude and Timing of Grandparental Coresidence During Childhood in the United States. Demographic Research, 37(52): 1695-1706.

Crosnoe, Rob and Rachel Dunifon (2017). “A Developmental Perspective on the Link Between Parents’ Employment and Children’s Obesity”. American Psychologist, 72(5): 474-486.

Su, Jessica, Rachel Dunifon, and Sharon Sassler (2015). “Better for Baby? The Retreat from Mid-Pregnancy Marriage and Implications for Parenting and Child Well-Being”. Demography, 52(4): 1167-1194.