A week after Russia’s invasion of Ukraine prompted global condemnation and unprecedented economic sanctions, clarity about the sanctions’ goals will be key to attempts to de-escalate the conflict – amid signs that European unity may be waning, Cornell faculty experts said during a March 4 panel discussion.

Sanctions rapidly triggered a financial crisis in Russia and economies tied to it, but became less clear as they were expanded, with demands ranging from a ceasefire to Russian withdrawal to ending Vladimir Putin’s rule, said Nicholas Mulder, assistant professor in the Department of History in the College of Arts and Sciences (A&S).

Mulder, author of “The Economic Weapon: The Rise of Sanctions as a Tool of Modern War,” said the severe sanctions on an economy as large as Russia’s represent “uncharted territory.” It will be vital, he said, for the United States, European Union and other partners to be clear about how sanctions might be pulled back in response to specific steps.

“That could be the difference between this war dragging on for months and even years, and us achieving a ceasefire, which will protect civilians and give us opportunity to reach negotiated settlements,” Mulder said. “Making those clear sanctions demands I think is the most important thing right now that we can do.”

Mulder was one of five faculty members who shared insights during “Russia’s War on Ukraine: A New Attack on Peace, Rights and Sovereignty,” hosted by the Mario Einaudi Center for International Studiesin cooperation with A&S and the Cornell Jeb E. Brooks School of Public Policy. The panel also included Dmitry Bykov, a Russian writer and dissident and scholar at risk hosted by the Einaudi Center.

The webinar was livestreamed to the public, while some members of the university community gathered to watch in Statler Hall. The event took place hours after the Interfaith Council held a prayer vigil on Ho Plaza in solidarity with the Ukrainian people, and after multiple rallies by students in recent days.

Introducing the faculty discussion, Wendy Wolford, vice provost for international affairs and the Robert A. and the Ruth E. Polson Professor in the Department of Global Development in the College of Agriculture and Life Sciences, said the university community could strive to make a difference through education and engagement in the world.

“We can stand together as a refuge and a bridge,” Wolford said. “As a community, we can take a stand for learning as the means to support the foundations of a better life.”

Rachel Beatty Riedl, the John S. Knight Professor of International Studies director of the Einaudi Center, and professor in the Department of Government (A&S) and in the Cornell Brooks School, moderated the panel.

“Our imperative is to use and share knowledge to assess this new attack on rights, sovereignty and peace with an eye to the history, to regional and global factors, and with expertise from a variety of perspectives,” Beatty Riedl said.

Bryn Rosenfeld, assistant professor in the Department of Government (A&S) and principal investigator of a long-running academic study of Russian public opinion and voting behavior supported by the National Science Foundation, said the invasion’s first week had revealed miscalculations by Russia, including about its citizens’ appetite for a prolonged conflict.

A survey she led in December, as Russia was massing troops along the Ukrainian border, found that fewer than 10% of Russians supported an expanded conflict with its neighbor.

“The idea that Ukraine and Russia are one state is not popular with most Russians,” Rosenfeld said.

Cristina Florea, assistant professor in the Department of History (A&S) who specializes in eastern and central Europe, said Russia and Ukraine’s complicated relationship dates back hundreds of years. Putin, she said, has been mixing and matching pieces of history to justify an act of aggression – one she said should be understood against the backdrop of the Soviet Union’s dissolution.

“What we’re dealing with now with Ukraine is in many ways a kind of continuation of this process of basically imperial collapse,” Florea said, “and attempt at resurgence … of recreating a kind of Russian sphere of influence.”

Mabel Berezin, director of the Einaudi Center’s Institute for European Studies and professor in the Department of Sociology (A&S), said in France just one week ago she witnessed rallies and the Eiffel Tower lit up in the colors of Ukraine’s flag as European Union members reacted to the invasion with remarkable unity. But in recent days, Berezin said, the EU appears to be returning to business as usual. She cited Germany’s announcement that it wouldn’t ban Russian oil and gas imports to preserve social peace, and called energy policy Europe’s Achilles heel.

“The collective action or political will to act as one interest group seems to be waning,” Berezin said. “Given how the week has progressed so far, Europeans need to do more than light their monuments in blue and yellow.”

Stephen Yale-Loehr, professor of immigration law practice at Cornell Law School and faculty fellow in the university’s Migrations initiative, discussed the extraordinary humanitarian crisis just beginning as more than 1 million Ukrainians have already fled the country, according to the United Nations. High as that number is, he said, we shouldn’t forget other hot spots – including Syria and Afghanistan – that have contributed to the highest levels of displacement on record, with 84 million people displaced by persecution, conflict, violence or human rights violations.

“Our international refugee system is reeling from all these crises and wars,” Yale-Loehr said. “The war in Ukraine is simply the most recent.”

For members of the public wondering how to help, Yale-Loehr advised donating to organizations such as the International Rescue Committee or International Refugee Assistance Project, and asking members of Congress to spend more on refugee assistance and to increase the number of refugees admitted by the U.S.

Said Yale-Loehr: “This shows how interconnected we all are.” 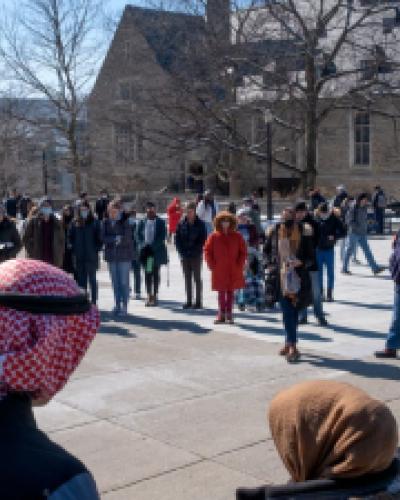